Most Americans Cutting Back on Holiday Travel and Spending, But Not Sacrificing Thanksgiving

Only one in four Americans plans to quarantine on Thanksgiving, but people are less likely to have travel plans in states where Covid-19 infection rates are high. 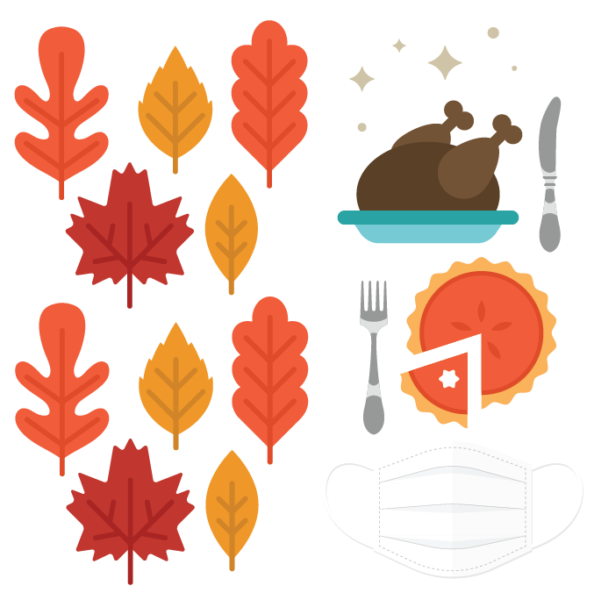 With coronavirus cases again on the rise, two out of three Americans say they don’t plan to travel far from home over the holidays, and most will cut back on holiday gift spending. But most Americans aren’t planning to quarantine on Thanksgiving and give up visits with extended family and friends.

That’s according to a Nov. 9 survey of 1,106 adults that adds to evidence that the economy is experiencing a “K-shaped” recovery, with households earning close to or less than the median income more likely to cut back on holiday gift spending.

Key findings from the survey:

Most Americans (66.9%) say the pandemic has affected their holiday travel plans. That’s even more likely to be the case in households with incomes of $75,000 or more, with 71.8% saying it has (click tabs in chart to segment survey results by income). Median U.S. household income was $68,703 in 2019.

Most Americans staying home for the holidays

Most Americans (66.3%) plan to stay home for the holidays, but an even higher percentage (69.6%) of families with household incomes of $75,000 or more say that’s the case. Overall, slightly more people plan to travel over the Christmas/Hanukkah holiday (22.7%) than Thanksgiving (21.8%).

The trend is reversed among households earning above the median income. In both cases, the difference is less than the survey’s 3% margin of error.

That’s in contrast to responses from the Northern plains states in the West North Central region, where only about one in five (22.9%) reporting they had travel plans.

According to the Centers for Disease Control, as of Nov. 16, North Dakota, South Dakota, Iowa, Minnesota, and Nebraska were among the 10 states with the highest Covid-19 case rates per 100,000 people reported in the last seven days.

Most don’t plan to quarantine on Thanksgiving

Although most Americans aren’t planning long trips, only 28.7% say they plan to quarantine, foregoing in-person get togethers with extended family and friends.

About one in four of those surveyed (26.6%) said they planned to quarantine during the Christmas/Hanukkah holidays, and not see extended family and friends.

Households of modest means are cutting spending on gifts the most

The majority of those surveyed (56.1%) said they’ll be spending less than usual on gifts over the Christmas and Hanukkah holidays.

But the impact of the pandemic was more pronounced on those with household income below $75,000, with nearly two-thirds (62.1%) saying they planned to cut back. In contrast, less than half of families (47.8%) earning $75,000 or more said they’d be cutting back on gifts.

Wealthier families are more likely to splurge on gifts

People from wealthier families were more than three times as likely to be planning a gift-buying spree. Among those with household incomes of $75,000 or more, 16.2% said they plan to spend $1,000 or more on holiday gifts, compared to 4.6% of people earning less than $75,000.

Most will pay cash instead of borrowing for gifts

Most Americans would rather not rack up new debt buying holiday gifts, with 54.4% reporting they plan to pay cash for their purchases. If they do borrow, credit cards or store credit are the preferred methods (43.9%), trumping personal loans (1.3%) and home equity loans (0.4%).

Wealthier respondents are more willing to finance a gift-buying spree, with 50% saying they’re planning to whip out their credit cards or accept offers of store credit. Among families earning less than $75,000 a year, only 39.8% said they planned to pay for gifts with a credit card, while 58.1% said they’d pay cash.

Methodology: SurveyMonkey Audience online poll of 1,106 adults conducted Nov. 9, 2020. Margin of error plus or minus 3%.

Credible is a multi-lender marketplace that empowers consumers to discover financial products that are the best fit for their unique circumstances. Credible’s integrations with leading lenders and credit bureaus allow consumers to quickly compare accurate, personalized loan options ― without putting their personal information at risk or affecting their credit score. The Credible marketplace provides an unrivaled customer experience, as reflected by over 3,800 positive Trustpilot reviews and a TrustScore of 4.7/5.

Home » All » Data Insights » Most Americans Cutting Back on Holiday Travel and Spending, But Not Sacrificing Thanksgiving

What to Do if Your Personal Loan Application Is Denied

High-Value Home Insurance: When Do You Need It?