At 27, Emily Pritchard has married, bought a home with her husband Brian, and returned to graduate school -- all while tackling nearly $100,000 in student loan debt. 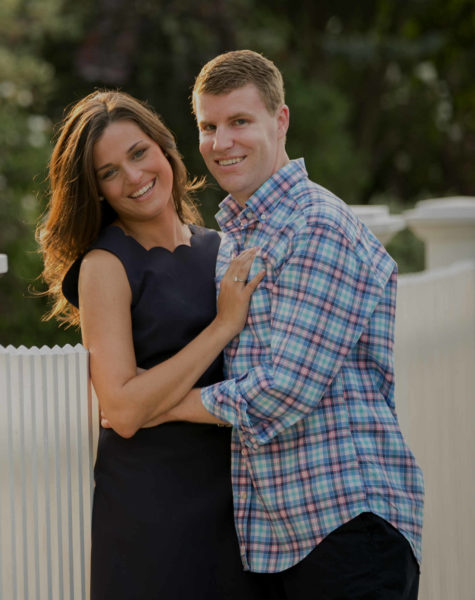 Our goal is to give you the tools and confidence you need to improve your finances. Although we receive compensation from our partner lenders, whom we will always identify, all opinions are our own. By refinancing your mortgage, total finance charges may be higher over the life of the loan.
Credible Operations, Inc. NMLS # 1681276, is referred to here as "Credible."

Student loan debt can be a burden that prevents college graduates from pursuing dreams like getting married, buying a home, saving for retirement, or pursuing a graduate degree.

At 27, Emily Pritchard is already checking off each of those boxes — and she’s well on her way to wiping out nearly $100,000 in student loan debt she took on to earn her bachelor’s degree from a small private college in Connecticut.

Pritchard, a financial services professional with a degree in accounting, has accelerated her timeline for paying off her student loans by refinancing them at a lower interest rate — twice.

But the Fairfield, Connecticut resident is on an even faster track to get out of debt today, having been chosen as the first Credible.com $25,000 sweepstakes winner.

“I always had a goal to pay off my student loans before I was 30,” Pritchard says. “Before, that was probably not going to happen. Now that dream is possible.”

It doesn’t take a degree in accounting to learn from Pritchard’s story. While she’s got the upper hand on her educational debt today, that wasn’t always the case.

It wasn’t until Pritchard was halfway through Quinnipiac University that she realized the magnitude of the debt she was taking on.

A small private school, Quinnipiac’s annual costs are higher than average — about $35,653 a year for students receiving federal financial aid, according to the Department of Education’s College Scorecard website. But its graduates also tend to earn more with their degrees — $60,600 a year, on average.

“Halfway through, I almost transferred to another school because of the cost,” Pritchard remembers. Although she stuck it out, when it came time to start repaying her loans, she decided she needed to educate herself about her options for repaying them.

“When I graduated in 2012, the interest rate on one of my loans was 11 percent, which is outrageous,” she says.

“Because I work in financial services, you are hearing about interest rates all the time,” she recalls. “I started Googling, ‘Who does student loan refinancing? What is the process?’ ”

When Pritchard refinanced her student loan debt for the first time in 2013, “there were very few options.”

She refinanced most of her debt with a credit union, which provided a new loan with a 6.5 percent variable interest rate. Although that was a good deal at the time, when the Federal Reserve started hiking interest rates, Pritchard wanted the certainty of a fixed-rate loan.

Increased competition among lenders, and Pritchard’s improving financial situation, allowed her to refinance a second time into a fixed-rate loan with a 4.75 percent interest rate (student loan borrowers have a right to prepay or refinance their loans without being assessed penalties).

Pritchard estimates that the lower interest rate and shorter repayment term on her new loan, which she found through the Credible marketplace, will save her an additional $11,000 over the life of the loan.

By leading a minimal lifestyle and budgeting carefully — “Anything left over goes to loans,” she says — Pritchard has been able to whittle her student loan debt down to $65,000.

Along the way she’s tied the knot, bought a home with her husband, Brian, and gone back to graduate school — Pritchard is pursuing a masters in finance from Fairfield University while holding down a full-time job as an account services professional with a large asset management firm.

Her employer is picking up part of her grad school tuition, and Pritchard pays the rest out of pocket. She’s also been careful to practice what she preaches to her clients, and has been setting aside money for retirement.

“A lot of people my age forget you do want to start saving now, because saving when you’re young is so much more impactful than if you wait until later in life,” Pritchard says.

Pritchard qualified for the Credible.com sweepstakes by referring friends to explore their refinancing options through the Credible marketplace, where borrowers can see actual rates they prequalify for with multiple lenders in about 2 minutes.

Asked if student loan debt is a difficult subject to discuss with friends, Pritchard said, “It’s something people are willing to talk about. I don’t necessarily discuss the amounts they owe, but people are definitely willing to discuss, ‘What did you do that helped you?’ ”

The first time she refinanced, the most confusing part of the experience was realizing that she had many types of loans, many with different interest rates and benefits. Like many borrowers who have refinanced, Pritchard chose not to refinance some of her low-interest federal student loans.

Her biggest reservation about refinancing was that she was planning to buy a home, and was concerned it might affect her credit score. But that reservation proved to be unfounded.

“In the long run it actually helped, because I was able to pay down the (refinanced student loan debt) faster,” she says.

Pritchard said winning the $25,000 Credible sweepstakes won’t tempt her to waver from her disciplined, strategic approach to paying down her student loans.

“This will free up more money to put toward those loans,” she says.

Biden’s Budget Excludes Student Loan Forgiveness, So What Should You Do With College Debt?