Thanks to a glut of used cars, automobiles now depreciate in value nearly twice as fast as in 2014. Photo credit: Shutterstock.

A glut of used cars coupled with the growing popularity of auto loans that take more than five years to repay could mean more car buyers will soon find themselves “upside down” on their auto loan — owing more than their car is worth.

According to a new report from the Consumer Financial Protection Bureau, the vast majority of people who borrowed money to buy a car used to pay off their loans in five years or less. As recently as 2009, just one in four auto loans took six years or more to pay back. Now 42 percent of loans carry repayment terms of six years or longer. 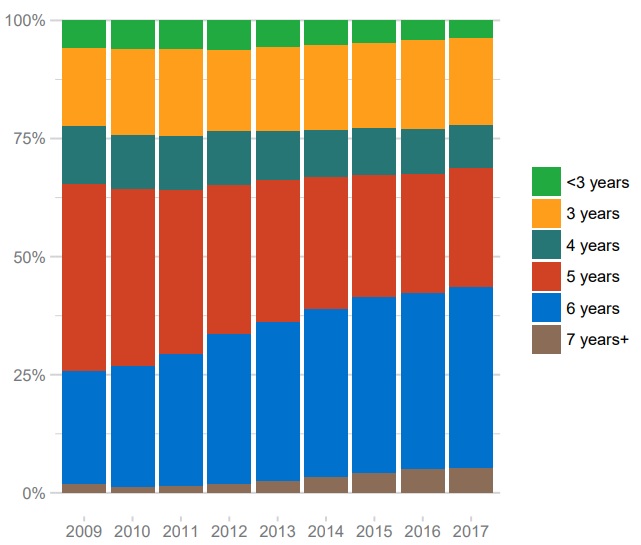 Stretching out payments over a longer period of time can lower your monthly payments, but increase your total interest charges.

Borrow $25,300 at 6 percent interest, and your total interest charges will be:

Another cause for alarm can be what happens to the value of the car as you’re making payments on it. In many cases, your car’s value may be depreciating faster than you’re paying off your loan.

As Bloomberg reports, seven consecutive years of rising new car sales mean that there’s a glut of used cars. That means cars today depreciate nearly twice as fast as in 2014.

Thanks to depreciation, if you want to trade your car in, or are forced to sell it, you might find that you have “negative equity” — your car is worth less than what you still owe. The longer your loan term, the more likely you are to be upside down — even after making several years of payments (see charts below).

“The move to longer-term auto loans is opening up more risk for consumers,” said CFPB Director Richard Cordray in announcing the release of the report. “These loans are more expensive and can result in consumers continuing to owe even after they are no longer driving their car.”

The CFPB found that the average credit score of borrowers taking out six-year auto loans was 674, 39 points less than those who opted for five-year loans. Borrowers with longer loans are also defaulting at twice the rate of shorter loans — more than 8 percent are going bad — although this could reflect the fact that riskier borrowers seem to prefer the longer loans.

Nevertheless, the CFPB may be gearing up to propose new restrictions on auto loans with longer terms, such as an “ability to repay” standard, said attorneys Peter Cubita and Barbara Mishkin of the law firm Ballard Spahr, in a post for the JD Supra legal blog.

Any time you owe more on your auto loan than your car is worth, you have negative equity. As the charts below demonstrate, the longer an auto loan’s repayment term, the longer you’re likely to be in a negative equity situation. The charts assume a buyer who borrows $25,300 at 6 percent interest to purchase a car of equal value, taking care of other expenses like sales taxes out of pocket.

In the first chart above, a buyer who makes payments on a five-year schedule will have some equity after two years of payments. The charts assume the car depreciates 25 percent in the first year of ownership, and 12-15 percent thereafter.

But take six years to repay the same loan, above, and it takes almost three years of payments before the loan is paid down enough that the buyer could walk away with a little cash.

The final chart shows that a buyer who takes seven years to repay the same loan needs almost four years to gain any equity in their car.

While a buyer who purchases the same car using a five-year loan has $10,741 in equity after making five years of payments, the buyer making payments over seven years has $2,402 in equity at the same point.

As the CFPB points out, buyers who want to trade in cars that have negative equity often roll the balance of their existing loan into a new one. This can not only make the new loan much more expensive, but increase your risk of having negative equity in your new car.