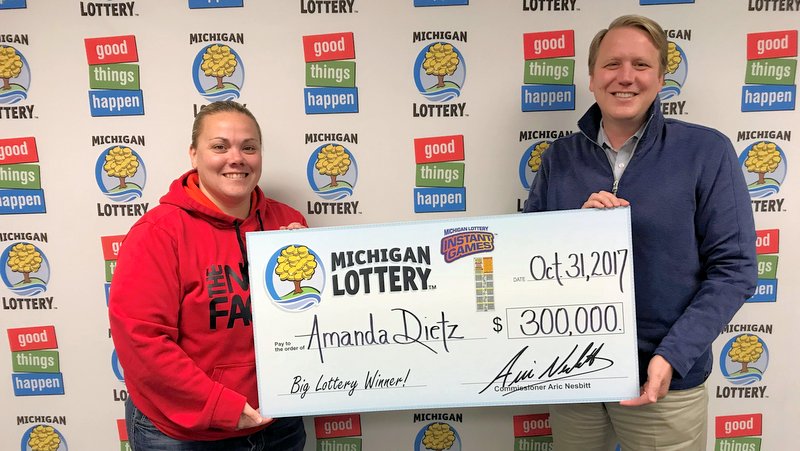 It might not be a strategy you can rely on, but a Michigan woman says she’ll be able to pay off her student loan debt after buying a $5 lottery scratcher that turned out to be worth $300,000.

“The day I bought my ticket, I had just given a speech about student loan debt,” said Amanda Dietz. “I told the audience how wonderful it would be to win the lottery to wipe all of my debt out at once, and now here I am. It’s incredible.”

The 35-year-old Vicksburg resident says she bought a Multi-Prize Bingo game ticket, which lets players scratch off 40 bingo numbers and play them on 10 cards, on a Monday. After scraping bingo numbers over the next few days, she was happy to see she’d won $100.

But when she tried to cash the ticket in, the clerk at the Speedway gas station where she’d bought it told her she’d won much more, and that she’d have to call Michigan Lottery officials to claim her winnings.

When it finally sunk in that she’d won $300,000, Dietz decided to pay off her student loan debt and go on a cruise. She’ll invest the money that’s left over.

1 in 4 adults have student loan debt

According to a recent Federal Reserve survey, more than half of adults who have completed college (53 percent) took on some debt in the process. Nearly one in four adults (23 percent) are still repaying educational debt, either money that they borrowed to put themselves through college, or for a child or grandchild’s education.

Although it’s relatively easy to win small amounts — say $5 to $100 — the odds of buying a scratcher ticket and winning enough to pay off your student loans are quite long.

The overall odds of winning the Michigan Lottery game Dietz played — Multi-Prize Bingo — are 1 in 3.77. Although the game will award prizes to 1.47 million winners, only about 1,000 prizes will be worth more than $100. Three people will win $300,000, making the odds of winning the top prize about 1 in 1.8 million.

Keep in mind that that the lottery is a way for states to generate revenue for schools and other needs without having to raise taxes (since many who play the lottery are far from wealthy, critics say these types of games are essentially a “poor tax”).

Although this particular game will award close to $19.5 million in prizes, the 5.5 million tickets that will be sold at $5 a pop will generate $27.8 million in revenue.

As the Michigan Lottery reminds bettors, “You shouldn’t think of gaming as a way to make money, but rather an enjoyable form of entertainment performed in moderation.” Since the vast majority of gamblers will lose more than they win back, “Your money limit on gaming should be based on what you can afford to lose.”