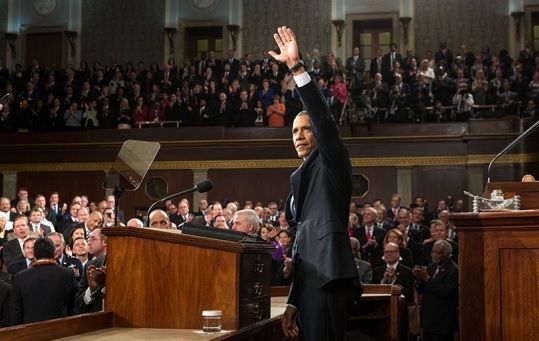 When President Barack Obama gave what is expected to be his final State of the Union address Tuesday evening, Sean McAllister, a 20-year-old finance major at Syracuse University, had a front-row seat to see history being made.

So did Tina Reyes, a 21-year-old Michigan State University political science major, and University of Massachusetts senior Alexis Ploss, a math major. Howard University psychology major Sable Givens was there, and so was Britney Woods, a University of Wisconsin communications major.

What these students had in common was not necessarily something to envy — they’re all carrying hefty student loan debt, and each had been invited to attend the State of the Union address by Senate Democrats hoping to build support for legislation addressing the issue.

There’s a Twitter hashtag too — #InTheRed — that Senate Democrats are using to promote a plan they say would allow federal student loan borrowers to refinance loans at rates last seen two years ago, index Pell grant awards to inflation, and make community college free for many students.

Regardless of your political views, the students invited to hear Obama speak sound like an exemplary bunch.

Woods told her hometown paper — the Racine, Wisconsin Journal Times — that she worked three jobs as a freshman, and is now putting herself through college working 25 to 30 hours a YMCA program that helps elementary school kids get through their homework and develop leadership skills.

Woods was the guest of Sen. Tammy Baldwin, D-Wisconsin, who offered the paper soundbites like, “higher education should be a path to the middle class, not a path to indebtedness.”

McAllister, the guest of Sen. Charles Schumer, D-N.Y., has more than $30,000 in student loan debt, and called it “a very positive sign” that Obama addressed student loans in his speech, syracuse.com reports.

[In his speech, Obama noted the rollout of income-driven repayment programs, like REPAYE, that allow student loan borrowers reduce their monthly payments to 10 percent of their income. He also pledged to get behind legislation that would provide two years of free community college “for every responsible student.”]

Reyes, the guest of Sen. Debbie Stabenow, D-Michigan, told the Detroit News she will be graduating with $100,000 in student loan debt and that she has “no idea how I’m going to pay it off.”

Givens, who expects to graduate with $50,000 in student loan debt, told the St. Jospeh, Missouri News-Press, that the issue is “something that me and my friends sit around our dorm rooms talking about … how are we going to survive once we graduate?”

Her host, Sen. Claire McCaskill, D-Missouri, accused the government of “profiteering off these young people,” echoing debatable claims by Sen. Elizabeth Warren that the government makes money on student loans.

Ploss, who has already amassed $50,000 in student loan debt and plans to go on to grad school and become a public school teacher, was Warren’s guest. The Massachusetts Democrat has sponsored several bills that would allow student loan borrowers to refinance their debt at lower interest rates. The bills have gone nowhere, having failed to generate the necessary support from Republican lawmakers.

Which might prompt some cynics to question whether Democrats have a realistic shot at actually accomplishing anything on the student loan front this year, given that Republicans control both the House and Senate. That fact was plainly acknowledged by the president, who opted not to recite a detailed list of goals and objectives for the year ahead, as is usually the custom in State of the Union addresses.

To prevent defaults, the ExCEL Act would automatically put student loan borrowers into income-based repayment plans, and take payments right out of their paychecks.

Citing CBO projections that the government stands to lose billions on student lending in the decade ahead, Zeldin said the ExCEL Act “contains specific prohibitions that guarantee each borrower meets his or her full financial obligation, and ensures the solvency of student loan assistance for years to come.”

Although not representatives of the thinking of all Republicans, Zeldin’s approach does seem to spring from the same fears voiced by other members of his party: That the federal government has taken too big a role in student lending, with dangerous repercussions for taxpayers (the risk of student loan defaults) and students (higher college costs, burdensome student loan debt) alike.

While there’s evidence that the ability to run up five- or six-figure student loan debt has contributed to rapid growth in higher education costs, cutbacks in state funding for public universities have also played a role in increasing the burden born by students and their families.

The Democrats’ latest approach to college costs and student lending would come with a pricetag — Stabenow tells the Detroit News that Senate Democrats would fund their $120 billion plan by changing the tax code to prevent companies from moving assets overseas to lower their tax bills.