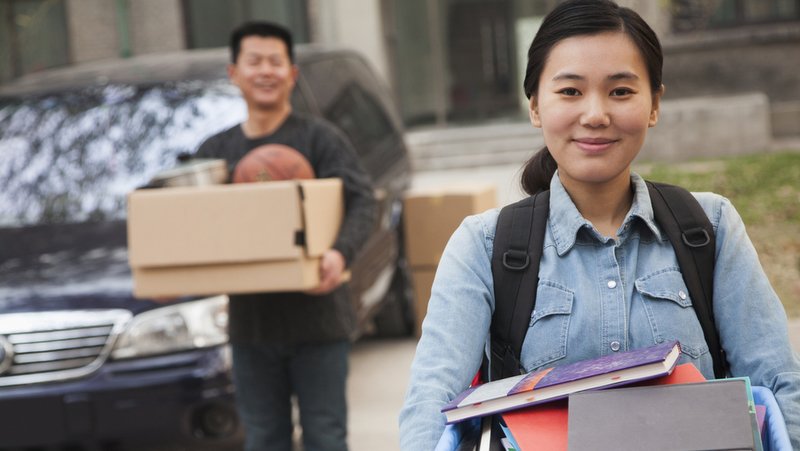 Student being dropped off at college by her father. Photo credit: Shutterstock.

The majority of students headed to college this fall only applied to one or two schools, and fewer than half of those pursuing a bachelor’s degree say they researched what they could expect to earn with it.

That’s according to an online survey of college-bound students and their parents conducted by Credible.com, a marketplace for student loans and student loan refinancing (see complete survey results at bottom).

The survey sheds light on issues that students and their families consider when applying to, choosing, and paying for college. The survey results suggest that while many families are justifiably focused on the quality of education a school can provide, less thought often goes into whether the cost of attending a school will pay off in the long run.

While most students said they’ll need to borrow to obtain their degrees, the majority of those who expect to take out student loans were confident they’d be able to pay them back. Many, though, were unaware that rates on federal student loans are going up July 1.

Incoming freshman could be hit with additional rate increases every year they’re enrolled, and rising interest rates could make it harder for families facing unmet funding needs that can arise when students hit their borrowing limits on the most affordable federal loans.

Since federal student loans to parents and graduate students carry higher rates than loans to undergraduates, those groups could be the hardest hit by rate increases.

While most respondents (68 percent) said they or their child applied to more than one college, less than half (47 percent) applied to three or more schools.

The most important factors when picking a school were the academic majors offered, followed by school rankings and academic reputation. Those factors ranked higher than the financial aid award offered by the school or the student’s out-of-pocket costs.

Still, nearly one in three respondents (29 percent) said that they decided not to attend the school that was their first choice because they received a better financial aid award offer from another school — a surprisingly high proportion, given that a minority of families applied to more than two schools.

Respondents planning to attend private, non-profit schools were even more likely to say that they’d decided not to attend the school that was their first choice after receiving a better financial aid offer from another school, with 38 percent indicating that was the case.

Three out of four respondents said they were headed to an in-state school, with proximity to home ranking as a more important factor than graduation rates, a school’s “fun” factor, or diversity.

While only 18 percent of respondents who chose a public college or university were headed out of state, a much higher proportion of students attending private, nonprofit schools (41 percent) said they were going to school in another state or overseas.

Most students pursuing bachelor’s degrees reported having either “no idea” (24 percent) or “only a rough idea” (28 percent) of what graduates of the school they plan attend typically earn.

By contrast, nine out 10 respondents pursuing professional degrees in fields like law and medicine said they’d researched the expected earnings of graduates of the school they planned to attend, with 75 percent saying their analysis included earnings by major or career. Those pursuing professional degrees were also the least likely to report that they were worried about their ability to repay their loans.

Among those who expect to borrow, the survey found that most expect to graduate with at least $25,000 in student loan debt. Nearly one in four (24 percent) say they’ll have $50,000 or more in educational debt by the time they pick up their degree.

But one student who expects to take on $50,000-$99,999 in educational debt said that, having researched salaries by major or career, he’s concluded that, “The types of jobs and salaries I can expect will make it fairly easy to pay loans.”

One parent who said his child hasn’t yet decided on a major indicated that he was “somewhat worried” that the student in question might not be able to repay an expected $35,000 to $49,999 in educational debt.

His child, he said, “Might pick [a major] and then change direction. The majority of college pursuits lead to post-college retail and service jobs.”

Another parent reported that his child is “strenuously avoiding debt” and will graduate with less than $5,000 in student loans. “My child has scholarship advantages, lives at home and is very scrupulous about how she spends money,” the parent said.

About two-thirds of respondents (66 percent) said they will attend a public university, compared to 16 percent who chose a private, nonprofit institution and 10 percent who were headed to private, for-profit school.

For those taking on five- or six-figure debt, rising interest rates on student loans could increase the cost of a degree.

Once issued, rates on federal student loans are fixed for life. But rates for new loans are adjusted annually, based on the results of an auction of 10-year Treasury notes held in May.

For students headed to school this fall, interest rates on new federal student loans will be:

While about half of those surveyed (47 percent) said they did not expect to borrow for college, two-thirds (67 percent) of those who will have to borrow were aware that rates on federal student loans are going up.

“I’m a single mother of two going back to finish my degree,” said one student who reported being “very worried” about her ability to repay $25,000 to $34,999 in student loan debt. “Supporting my children is hard enough with all the other bills, but I put myself in loan debt to get the degree which I need to find better paying jobs. With all my other financial responsibilities and the interest that accrues on the loans, I don’t know how I’ll be able to afford to pay them off.”

Dependent students can only take out a total of $31,000 in federal direct loans at the 4.45 percent rate for undergraduates before turning to costlier sources of financing, such as PLUS loans.

Assuming that interest rates continue to rise gradually over the next several years, a student who graduates with the maximum of $31,000 in federal direct unsubsidized loans at a blended rate of 5.3 percent would pay $40,004 to retire that debt over 10 years — $1,139 more than the $38,865 in total repayment costs they’d be looking at if they’d been able to take all of their loans out at the old rate of 3.76 percent, according to the Department of Education’s student loan repayment estimator.

According to the College Board’s Trends In Student Aid report, about 7 million undergraduates took out federal direct loans in 2015-2016, compared to 787,000 parents who took out PLUS loans. But the average parent PLUS loan was more than twice as big as the average undergraduate student loan — $15,250.

After taking into account financial aid, tax credits and tuition discounts, the College Board reports that the average annual net tuition and fees plus room and board at public four-year institutions is $14,210. So a family’s out-of-pocket costs to send a child to a public university for four years averages $56,840.

Once a student boarding at an in-state public school hits the $31,000 limit on federal direct loans for undergraduates, they and their family would be looking at a funding gap of $25,840, on average.

The funding gap is even bigger for families sending children to nonprofit private universities. According to the College Board’s Trends in College Pricing 2016 report, the average annual net tuition and fees plus room and board at private nonprofit four-year institutions is $26,080. So even after taking into account financial aid, tax credits and tuition discounts, a family’s out-of-pocket costs for four years at a private nonprofit college or university averages $104,320.

That means that after maxing out the $31,000 limit for federal direct undergraduate loans, a family sending a child to a nonprofit private university would be looking at a funding gap of $73,320, on average.

1. Will you, or your child, be attending a college or university this fall, as either a new or returning student?

2. What type of degree are you (or your child) pursuing?

3. Thinking back to the college application process, how many colleges did you (or your child) apply to?

4. What factors were important to you in choosing a school? Rank from least to most important (results displayed as weighted average between one and seven)

5. I (or my child) decided not to attend the school that was my first choice, because I received a better financial aid award offer from another school.

6. Is the college or university you (or your child) will be attending public or private?

7. Did you (or your child) choose to attend a college located in your home state, or an out-of-state school?

8. Will you (or your child) take out student loans to pay for college?

9. What types of loans do you expect you or your child will rely on to pay for college (check all that apply)?

11. If you were to rely on private student loans to pay for college, would you prefer a fixed- or variable-rate loan?

12. How much student loan debt do you expect to have when you graduate?

13. Have you researched salaries earned by the graduates of the school you will attend?

14. How confident are you that you (or your child) will be able to repay your student loan debt after graduation?