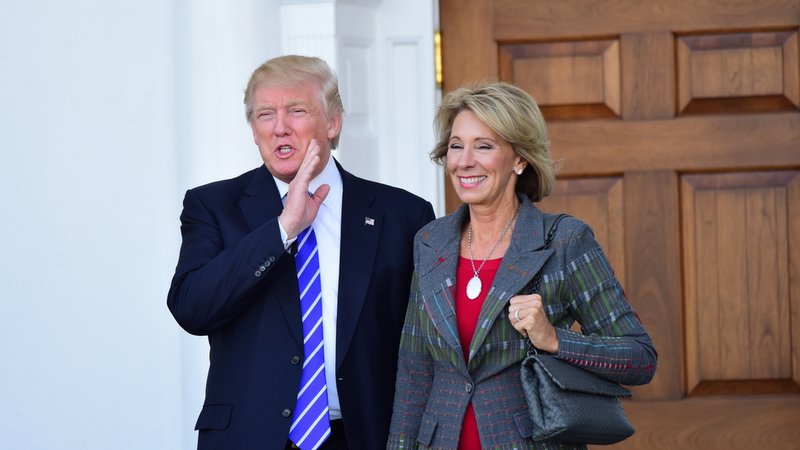 The Trump administration says it will resume, “as soon as possible,” a stalled review of pending loan forgiveness claims filed by tens of thousands of student loan borrowers who say they were defrauded by for-profit colleges.

In the meantime, legislation by House Republicans that would rewrite the law to protect private schools from similar claims in the future is picking up steam in Congress.

Starting in the summer of 2015, the Obama administration approved $449 million in student loan debt relief to nearly 32,000 students who alleged that for-profit colleges including Heald, Everest, and WyoTech misrepresented their job placement rates, and whether credits earned at the schools could be transferred.

Most of the approvals for loan forgiveness — granted under the authority of a previously little-used “borrower defense to repayment” legal argument — were granted in the second half of 2016, as the Department of Education staffed up to process claims from students in the aftermath of a 2015 bankruptcy filling by the schools’ parent company, Corinthian Colleges Inc.

But the Department of Education has not approved any borrower defense to repayment claims from students who attended for-profit schools since Donald Trump took office on Jan. 20, and stopped reviewing claims altogether in May.

In June, Secretary of Education Betsy DeVos said she wanted to revisit the rules put forward by the Obama administration for processing such claims, saying her predecessors “missed an opportunity to get it right. The result is a muddled process that’s unfair to students and schools, and puts taxpayers on the hook for significant costs.”

In a report looking into the Trump administration’s foot-dragging, the Department of Education’s Office of the Inspector General (OIG) noted that nearly 26,000 additional borrowers have filed claims since Trump took office.

The Dec. 8 report noted that a committee charged by DeVos with drawing up new borrower defense regulations won’t wrap up its meetings until February, 2018, and that new rules aren’t expected to be in place until July, 2019.

For now, the inspector general’s report recommended that the Department of Education resume processing claims in seven specific categories filed by students who attended Heald, Everest, Wyotech, and some ITT Technical and American Career Institute campuses.

Loan forgiveness claims in seven categories to be reviewed

In a response to the report, A. Wayne Johnson — the chief operating officer of the Department of Education’s office of Federal Student Aid — said review of claims in seven categories will resume “as soon as possible,” once “interim procedures” are in place.

The categories of claims that will be reviewed can be summarized as:

Before the review of claims was shut down in May, 11,857 requests for relief from students who had attended Corinthian schools had already been “flagged” for approval. Johnson said final approval of “some of these claims” is imminent.

But Johnson did not shed additional light on the ultimate disposition of another 7,285 loans that the report said had already been flagged for denial — or 21,927 loans that had been reviewed but for which no preliminary determination had been made. The report also said that as of July 24, 26,026 claims had not yet been reviewed at all.

It’s expected that many of those claims will be rejected, but the Department of Education now says it will forgive some of the interest owed if borrowers end up having to wait more than a year before hearing that their claim has been denied.

(When the Department of Education receives a “borrower defense” claim from a student loan borrower, it notifies loan servicers to place their loans in forbearance. While a loan is in forbearance, the borrower doesn’t have to make payments, but interest continues to accumulate on the outstanding loan balance).

Despite the challenges the Department of Education faced in evaluating claims, Johnson said, “we are pleased to note that OIG did not identify any errors in the adjudicated claims, and that the review for each of the sampled claims was properly documented.”

Attorneys general in 18 states and the District of Columbia have sued the Department of Education to force it to enforce the borrower defense to repayment rule put forward by the Obama administration.

Borrower defense to repayment claims, it should be noted, can be filed by any student who is eligible to receive federal student aid, regardless of whether the school they attend is public or private, nonprofit or for-profit. But the borrower defense rule is mainly aimed at for-profit schools, and it isn’t the only one that’s being rolled back.

To make sure that students taking out federal student loans to attend for-profit schools get their money’s worth, the Obama administration in 2014 finalized “gainful employment” regulations requiring schools to prove that graduates actually learn skills and receive training that helps them land jobs.

To the consternation of Democrats and civil rights groups, the Department of Education has delayed implementation of key aspects of what DeVos has characterized as “overly burdensome” gainful employment regulations, and initiated a process to rewrite them.

But the debate over borrower defense and gainful employment regulations would become moot if Congress adopts legislation now working its way through the House of Representatives.

Do do that, the PROSPER Act would do away with distinctions between nonprofit and for-profit schools — eliminating the Department of Education’s authority to put forward rules like the gainful employment and borrower defense regulations in the first place.

The PROSPER Act — an overhaul of the Higher Education Act that sailed through the House Education Committee this week — would also impose tighter federal borrowing limits on parents and grad schools that could leave more families turning to private loans, and close the door on time-based loan forgiveness for future borrowers.

“Unfortunately, the bill’s vision of higher education is an emboldened industry at the expense of students,” analysts at the left-leaning Center for American Progress concluded. “In a one-two punch, the bill would first eliminate key requirements that shield students from being taken advantage of while they’re in school, and then follow up by undercutting the safety net that prevents debt from ruining the lives of low-income borrowers.”

As was the case with the House’s tax bill, the Senate is likely to have its own take on such major policy reform, and Democrats are expected to have more of a say there, U.S. News reports.

But Senate Republicans are also likely to push for changes that make life easier for private schools.

The leaders of the House and Senate Education committees — Rep. Virginia Foxx, R-North Carolina, and Sen. Lamar Alexander, R-Tennessee — are both skeptical about what they see as the federal government’s expanding role in higher education, and have questioned the borrower defense to repayment and gainful employment regulations, note attorneys Vince Sampson and Mike Goldstein of the law firm Cooley LLP writing for the Lexology blog.

But Senate Democrats including Elizabeth Warren (D-Massachusetts) and Dick Durbin (D-Illinois) are likely to have little sympathy with that argument. Last month, the two released a report urging DeVos to get the process of reviewing borrower defense claims back on track.

“The widespread fraud committed by Corinthian Colleges and ITT Tech wreaked havoc on the lives of tens of thousands of students nationwide, leaving them with high levels of debt, poor job prospects, useless degrees and credentials, and in many cases no degree at all,” Durbin said at the time. “We can’t leave these students holding the bag. The Department should immediately provide the full relief to which these and other defrauded borrowers are entitled under the law.”