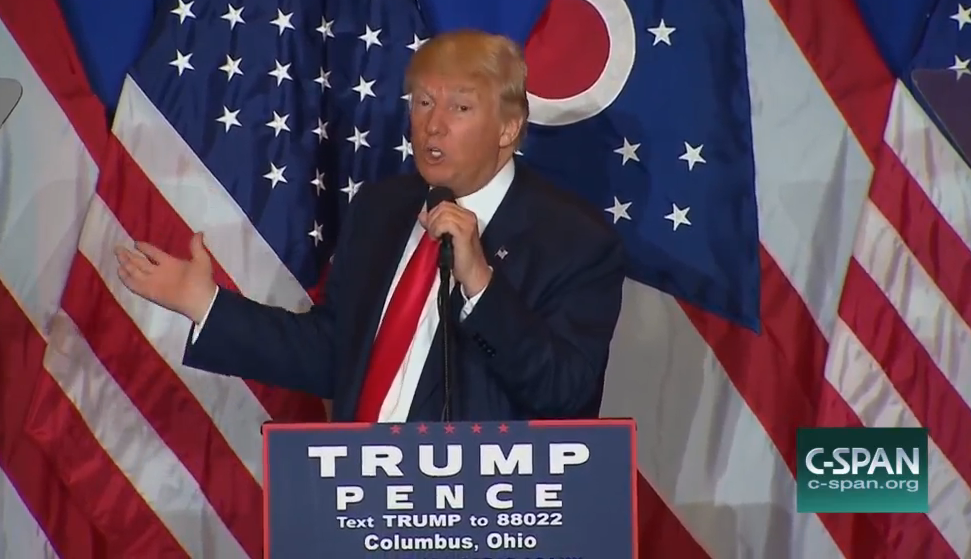 With the election less than a month away, Donald Trump has announced a proposal to put millions of student loan borrowers on a faster track to loan forgiveness, letting them off the hook after 15 years of payments in an income-driven repayment plan.

Trump’s proposal, unveiled in speech Thursday at a campaign stop in Columbus, Ohio, would cap student loan payments for participating borrowers at 12.5 percent of monthly income.

Although that’s slightly more than the 10 percent of discretionary income required from borrowers enrolled in popular IDR programs like REPAYE, it takes at least 20 years to qualify for loan forgiveness in REPAYE — 25 years if you’re paying off graduate school debt.

Given the hostility in Republican circles toward the Obama administration’s expansion of student loan forgiveness through programs like REPAYE, Trump’s proposal caught many political observers and higher education analysts by surprise.

Jason Delisle, a fellow at the conservative American Enterprise Institute who has been critical of REPAYE, unleashed a tweet storm after Trump’s speech declaring that the candidate was “running to the left of Obama” on student loans. 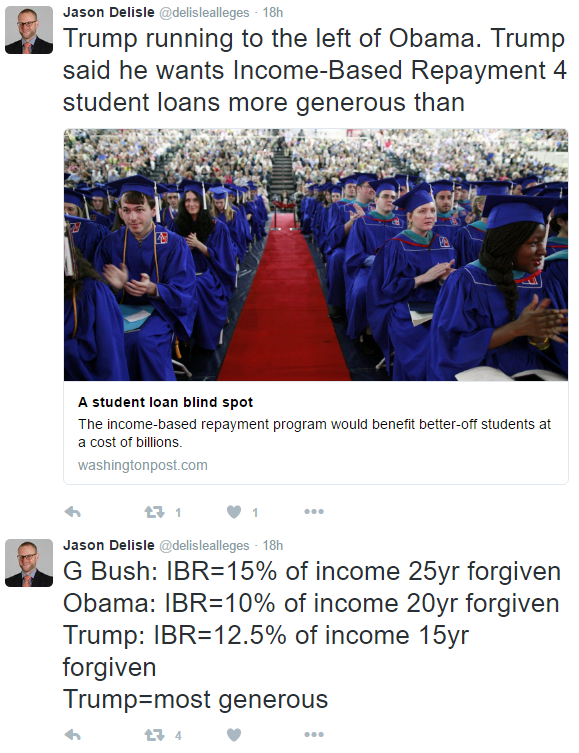 Delisle and his colleague Alexander Holt maintain programs like REPAYE disproportionately benefit high-earning borrowers with graduate degrees, who are the most likely to have large debts forgiven. The Obama administration has proposed revisions aimed at addressing that issue, which it estimates would save the government about $49 billion over the next 10 years.

Trump’s proposal to forgo an extra five or ten years of payments from potentially millions of student loan borrowers would cost taxpayers a considerable sum, Delisle told the Washington Post.

That raises questions about whether, should Trump win the election, his fellow Republicans would get on board with his student loan forgiveness plan. Since Trump hasn’t provided more details on the proposal, it’s unclear if there could be other components that would cut costs, such as eliminating the Public Service Loan Forgiveness program, which provides tax-free loan forgiveness to government and nonprofit employees who make 10 years of payments.

Trump provided no cost projections, but his campaign told the Washington Post’s Danielle Douglas-Gabrielle that it would be paid for by cutting federal spending, and savings from reduced student loan defaults.

If Trump is proposing that everyone pay 12.5 percent of their monthly income and qualify for forgiveness after 15 years, with no income cap to qualify, than the proposal “would be super progressive,” New America’s Amy Laitinen told Inside Higher Ed. But if it includes eligibility requirments like the current PAYE and IBR plans, “it would be regressive because the benefits accrue largely to wealthier graduate students [rather] than poorer undergrads and there is an income cap.”

A lack of details was also an issue with a related proposal Trump put forward Thursday, to force schools to use more of their endowments to reduce tuition and fees, or risk losing their tax-exempt status.

The Clinton campaign issued a statement calling Trump’s promises “empty” and pointing out that Clinton released a detailed plan for addressing higher education cost and student debt more than a year ago. Clinton’s plan — which would provide tuition-free college for most students, and allow borrowers to refinance student loans at current rates — is expected to be a tough sell with Congressional Republicans.