Which type of college gives student loan borrowers the biggest bang for their buck?

This Credible Insights piece examines the top universities in each commonly discussed category: Ivy League, public universities, national private universities, and liberal arts colleges.[1] We examined the data to determine which type of college gives its graduates the biggest bang for their buck.[2]

Refinance your student loans! Get personalized rates and compare loans offered by multiple, vetted lenders on Credible.
Find my rate

Who comes out on top?

Based on the top five schools in each category as ranked by U.S News & World Report[3], Ivy League graduates benefit the most when it comes to student debt, and top national private universities have the edge when it comes to both early career and mid-career median salaries.

Contrary to the commonly held belief that public institutions result in the least amount of student loan debt for their graduates, our analysis found that public university graduates, including UC Berkeley and UCLA, held the highest amount of student loan debt. Furthermore, they also had lower projected mid-career salaries compared to Ivy League and national private university peers, with liberal arts graduates only slightly behind. Graduates from the top liberal arts schools have a lower average debt upon graduation, but both lower early career and mid-career median salaries. 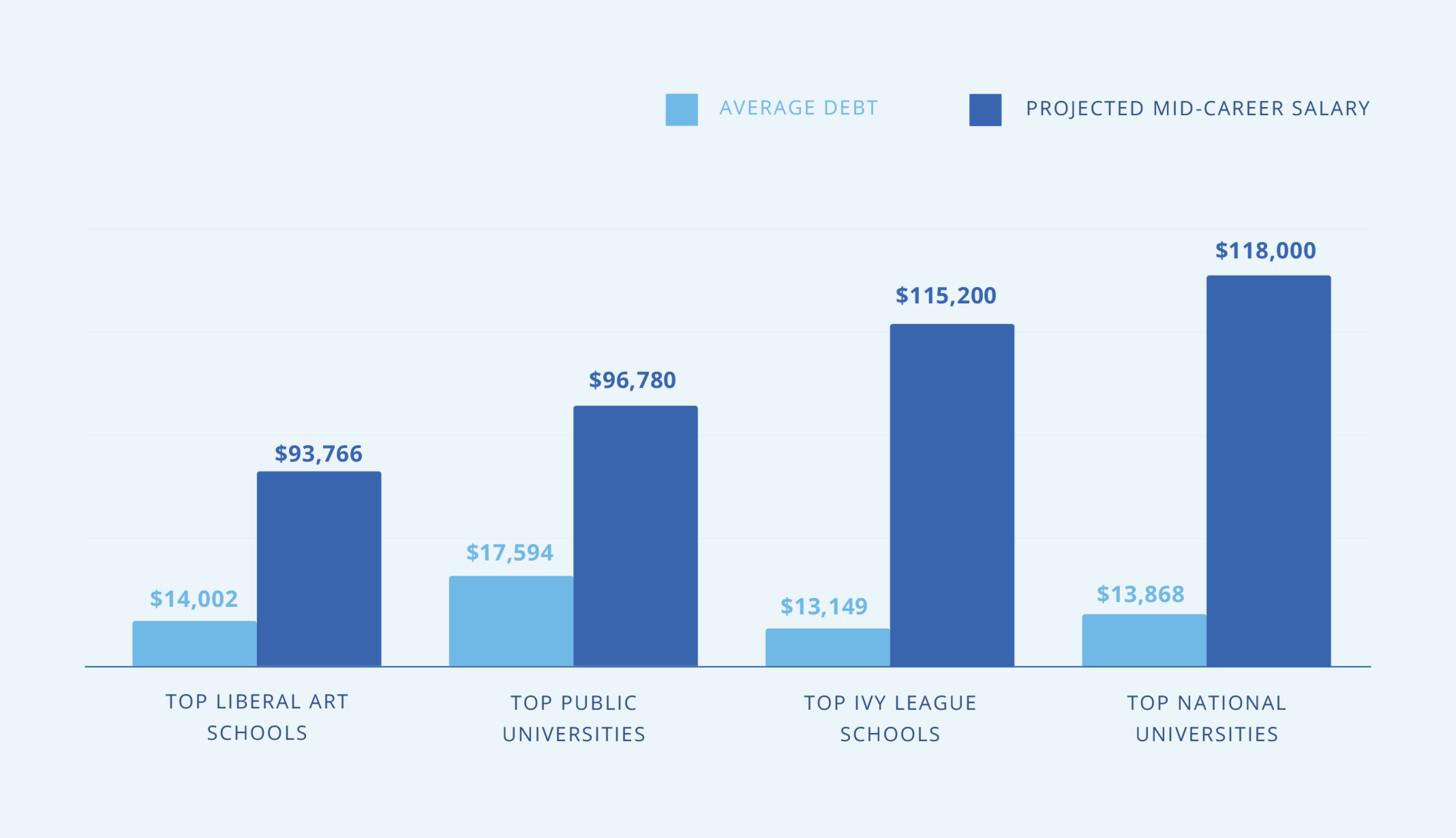 Skyrocketing student debt, but not at the top universities

In an Oct. 27 report, The Institute for College Access & Success (TICAS) found that between 2004 and 2014, student debt rose at a staggering 56% while inflation only rose 25% during that same period of time.[4]

The importance of endowments

More elite schools have bigger endowments that can help lower, middle, and even upper income students with financial support. Many of these schools have successful alumni who are proud of their attendance and give back generously, with the average student receiving financial aid on those campuses estimated to be paying about a quarter of the public sticker price.

But don’t think it’s an easy ride. These elite schools are very difficult to get into. The acceptance rates at Princeton and Harvard for the class of 2019 were a mere 6.99% and 5.30%, respectively.

What should prospective students be thinking about?

An overarching conclusion from our study is that college applicants should consider how their future student debt and projected salary may compare across their college options, and also consider their ability to receive school aid from private institutions when deciding where to apply. Many students often see the more expensive price tag and are immediately deterred, without taking into account the influence that attending the college may have on their future projected earning power.

Importantly, the study supports that private education is likely to pay off in both the short and long term – with the public Institutions analyzed having the highest debt as well as the lowest projected mid-career salaries. It should be remembered though, that a borrower’s college major is an added layer that plays a significant role in determining salary.

Attending college can be a big financial decision, and applicants should assess what makes the most sense for them overall, as understanding that college choice can have a significant influence on their futures.

Home » All » Student Loans » Which type of college gives student loan borrowers the biggest bang for their buck?

Iowa Student Loans: How to Pay for College in Iowa

College ROI: 6 Tools to Gauge the Return on Your Degree

Paying for College at Public Universities