Millennials with college degrees have reaped more benefits from the economic recovery than their less well-educated peers, and are overwhelmingly optimistic about their future prospects. But rather than splurging on a vacation or a new car, their top priorities include becoming debt-free and saving for retirement.

The Credible.com poll echoes findings of a monthly Conference Board survey, which shows the Consumer Confidence Index at a 15-year high. If jobs and wages continue to post gains, the Federal Reserve is widely expected to continue nudging interest rates up this year, with the next increase coming as soon as March 15. Rates on credit cards and variable-rate student loans are often tied to the prime rate or LIBOR, which track the Fed’s moves closely.

One reason millennials don’t seem inclined to squander windfalls from a new job or raise may be that many are loaded down with debt.

Credible.com’s poll showed that the more education millennials have, the more likely they are to be employed full-time and to report that their personal finances have improved in the last 12 months. But they’re also more likely to be paying down student loan debt balances that exceed $20,000, $50,000, $100,000 or more, the survey showed.

By taking advantage of their improving circumstances to pay down debt like credit cards and student loans, millennials can put themselves in a better position to refinance their educational debt at lower interest rates.

Using a windfall like a new job or raise to pay down existing debt can reduce a borrower’s debt-to-income ratio and boost their credit score, making it easier for them to qualify for low rates from a growing number of lenders that offer student loan refinancing.

Credible.com founder and CEO Stephen Dash said the improving economy opens opportunities for millennials to put their personal finances on even firmer ground in the months and years ahead.

“Credible has helped thousands of borrowers find the right lender to refinance their student loan debt, putting many on the path to realizing long-term goals like becoming homeowners, starting their own business, or earning a graduate or professional degree,” Dash said.

Keep Reading: How Millennials with Student Loan Debt Are Buying That House in the Suburbs

Millennials are optimistic about the future

Among all millennials polled, 69 percent expected their personal finances to improve in the next 12 months, and only 9 percent predicted they’d get worse.

The proportion of millennials expecting their finances to improve was virtually the same regardless of whether they had a college degree or not — 68 percent of those with postsecondary degrees were optimistic, and 70 percent of those without degrees had a bright outlook.

But millennials without college degrees were the most optimistic that their finances will improve “a lot” in the months ahead — an outlook that could reflect support for President Donald Trump among less-educated voters, and belief in his promises to bring manufacturing jobs back to the U.S.

Among millennials with a high school degree or equivalent, 33 percent said they expect their personal finances to improve “a lot” in the next 12 months, compared to 15 percent of those with a bachelor’s degree.

Only one in three millennials reported having more than $20,000 in personal (non-mortgage) debt. But the more educated they were, the more debt they were likely to be paying back.

Saving and paying down debt are top priorities

Asked how they’d spend any disposable income during the next 12 months, millennials ranked saving and investing as their top priority, followed by accelerating repayment of debt including credit cards and student loans. Both of those thrifty goals outranked taking a vacation or buying a car or home.

Millennials with college degrees tended to rank accelerating debt repayment and saving and investing as more important priorities than those without degrees, and were even less focused on buying a home or car in the near term than the group as a whole.

Lenders today are willing to provide student loan refinancing to a wide spectrum of borrowers — recent graduates are using Credible.com to refinance student loan balances that are nearly as big as their annual salaries.

But even borrowers who already qualify for refinancing can often get better rates if they’re able to boost their credit score by a few points. Credit utilization — how much of your available credit you are using — accounts for a good chunk of your FICO score.

For the long term, becoming debt free and saving for retirement were top goals across educational levels, with buying a home coming in a close third. Attending graduate school was a ranked as a more important goal than starting a business by respondents across most educational levels.

No degree? You’re twice as likely to be out of work

The results of each survey question are provided below. In addition to charts showing answers for all respondents, tables break down responses by college degree holders and non-degree holders. 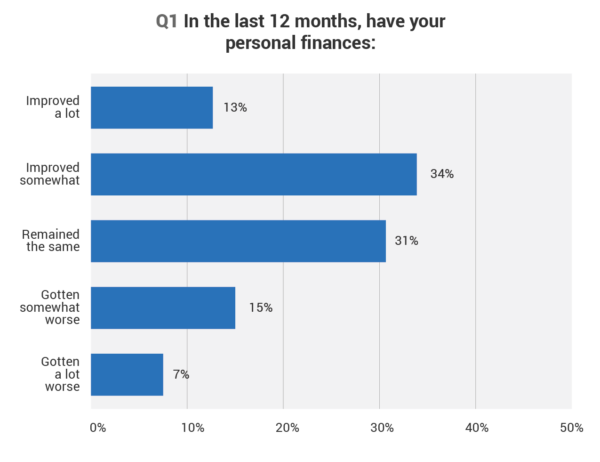 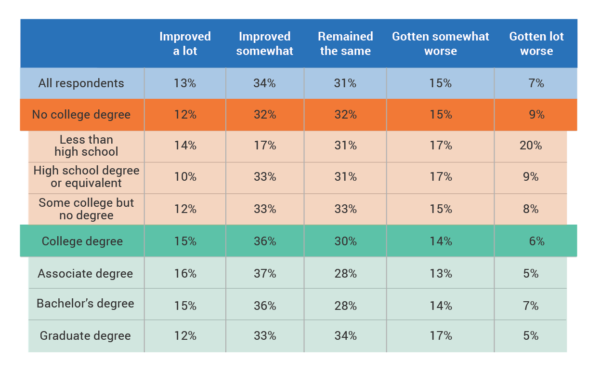 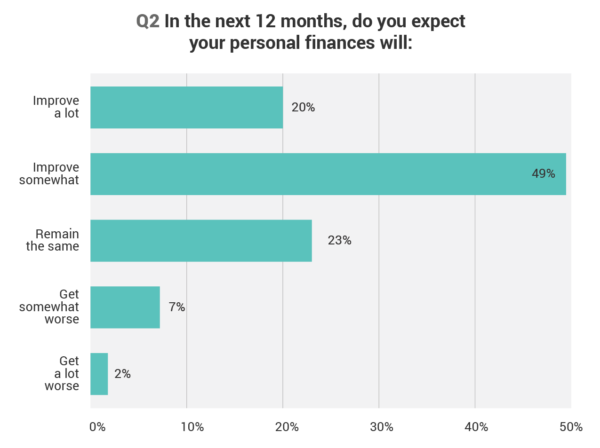 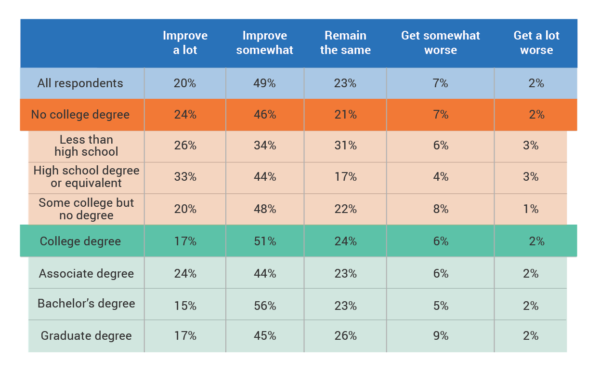 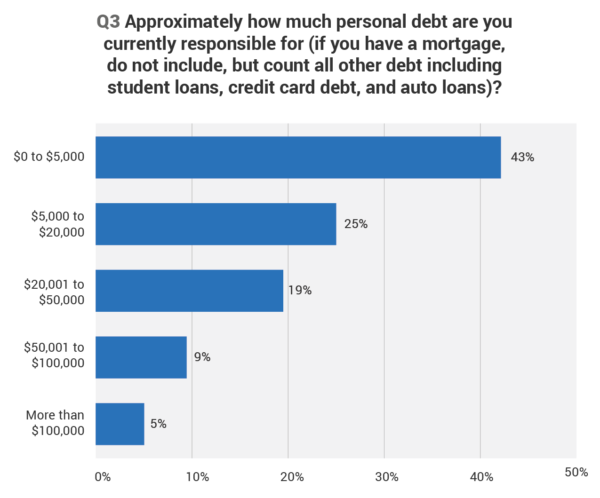 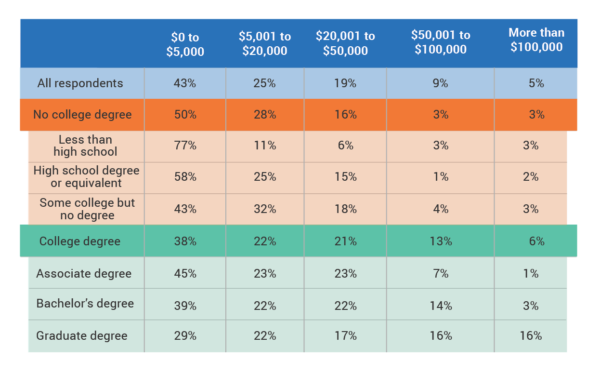 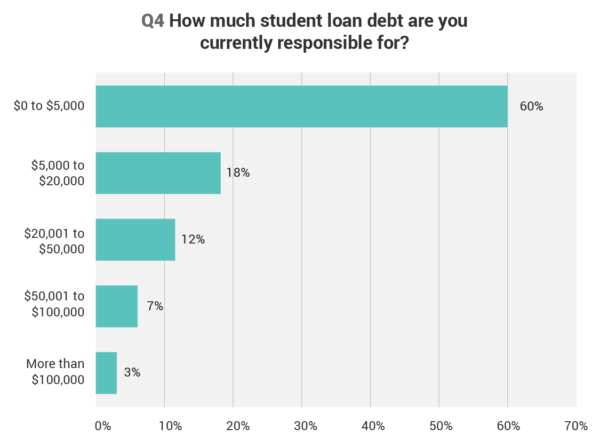 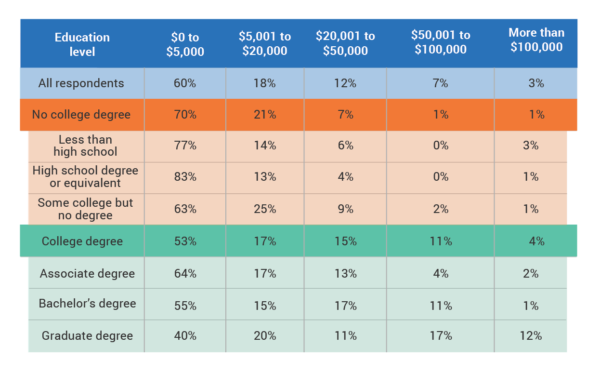 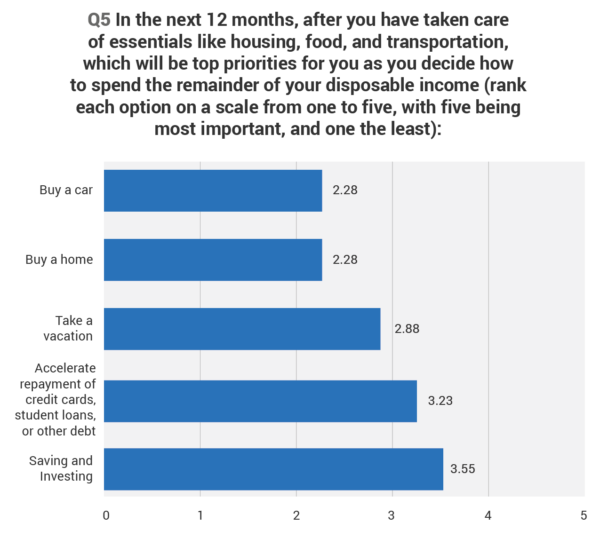 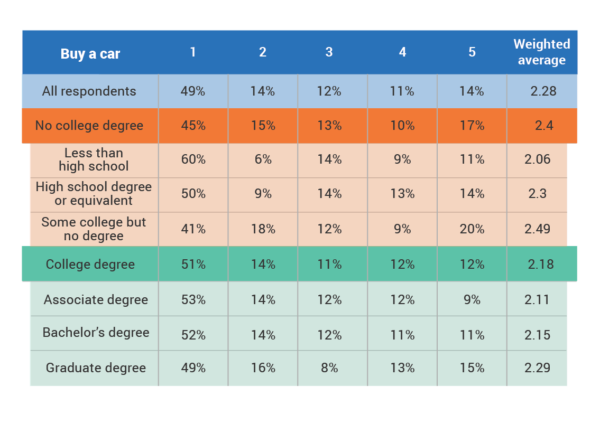 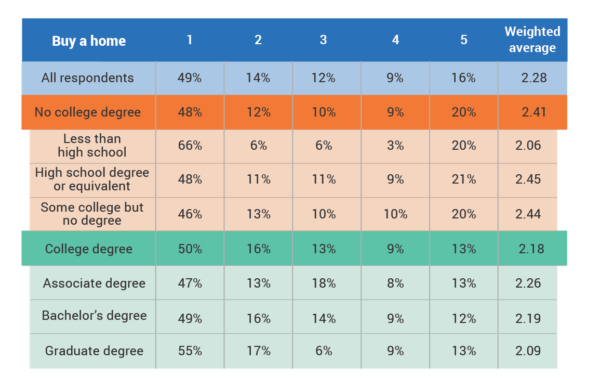 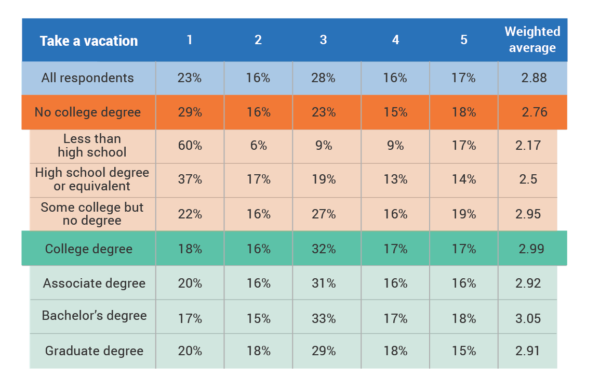 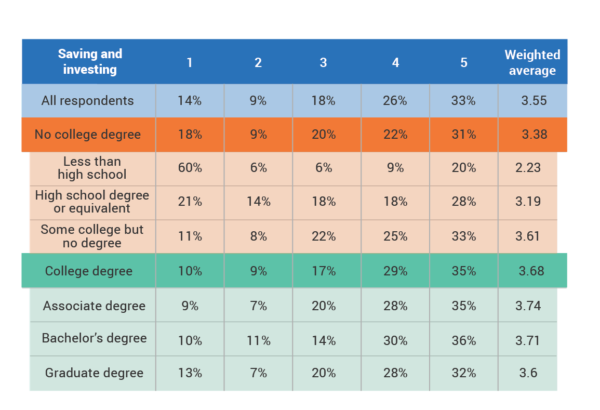 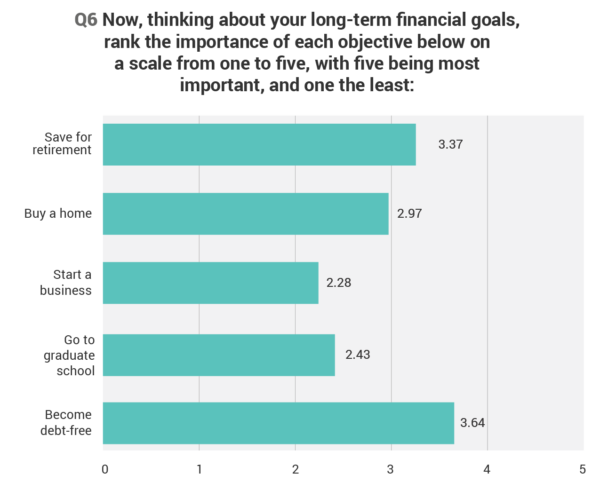 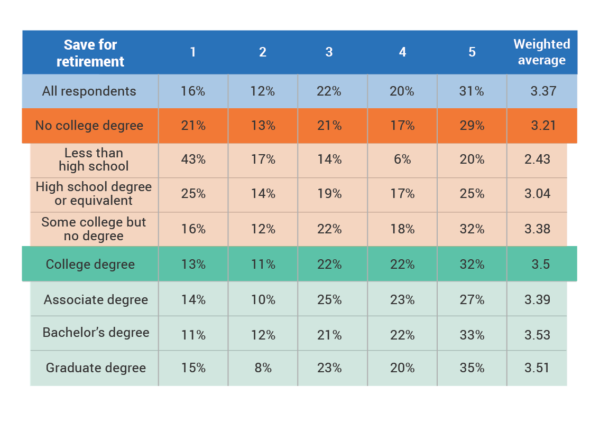 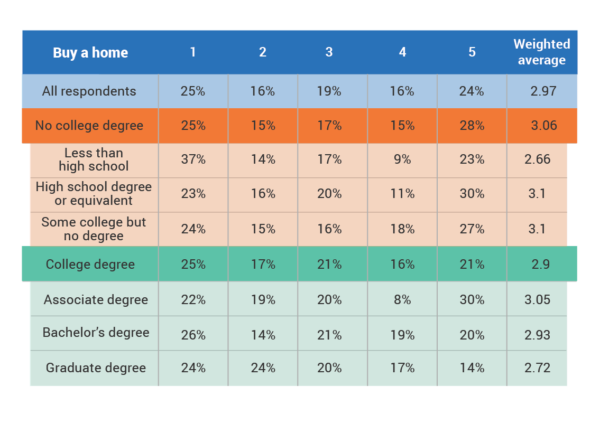 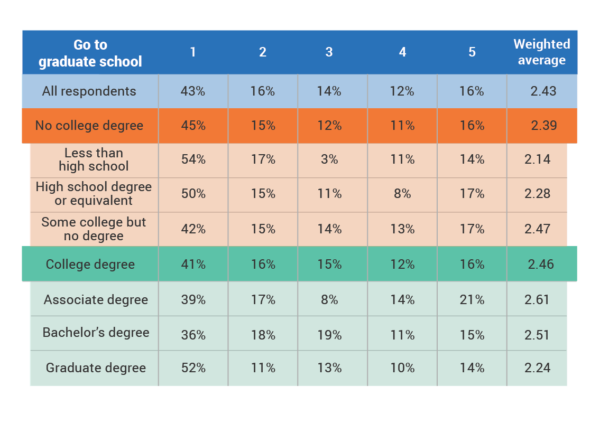 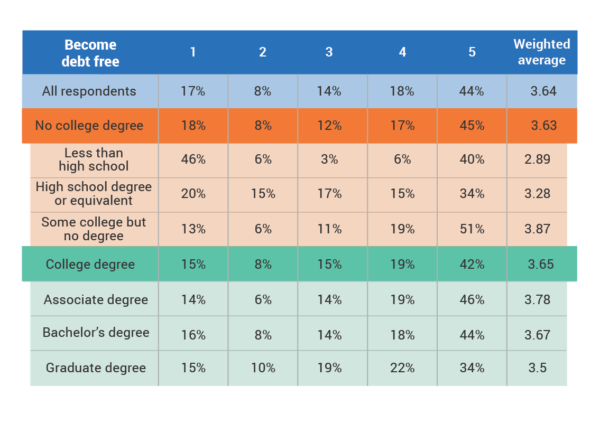 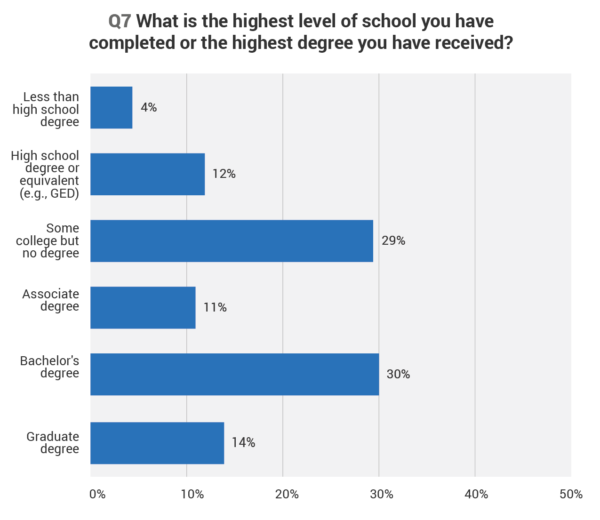 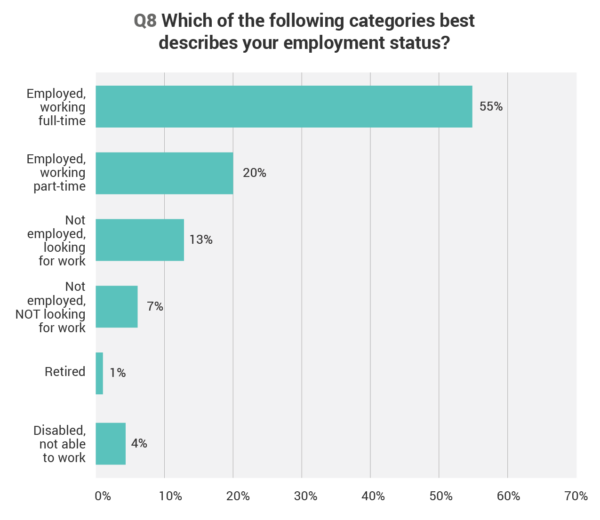 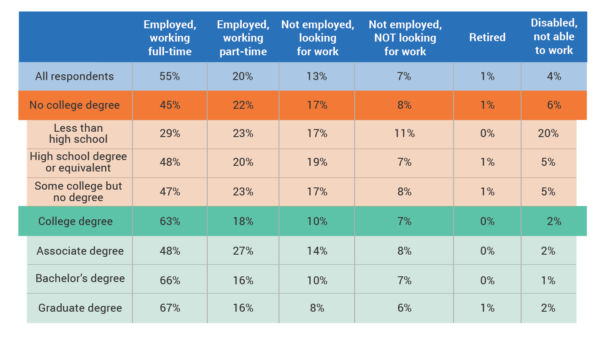 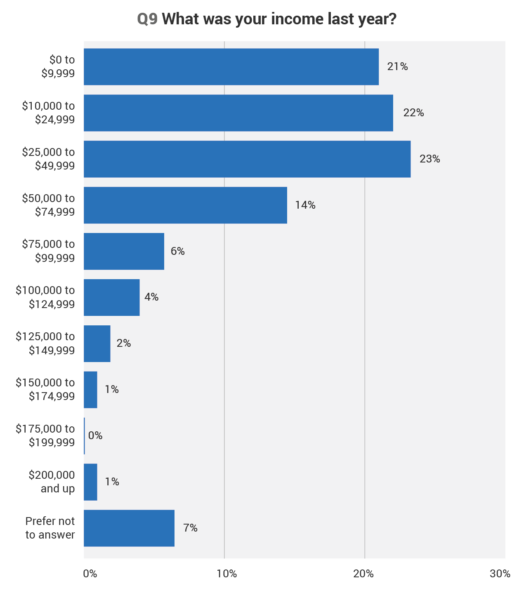 We encourage you to provide honest and thorough feedback about your experience (not the experiences you’ve heard from other people), the good as well as the bad. But, we also want you to follow these content guidelines. The comments or responses that Credible posts under its official account are not provided, reviewed or endorsed by any of the financial institutions unless specifically stated otherwise in the response. Please keep in mind that the financial institution has no obligation to monitor any comments, questions or reviews you post and is therefore not responsible for ensuring your posts and/or questions are answered.

Less than half of millennials have explored student loan refinancing