The Right Cosigner Can Save Students Thousands on Their Student Loans

A new analysis shows that even students with strong credit scores can get better rates on private student loans when they apply with a cosigner, and highlights the value of comparing rates with different cosigners. 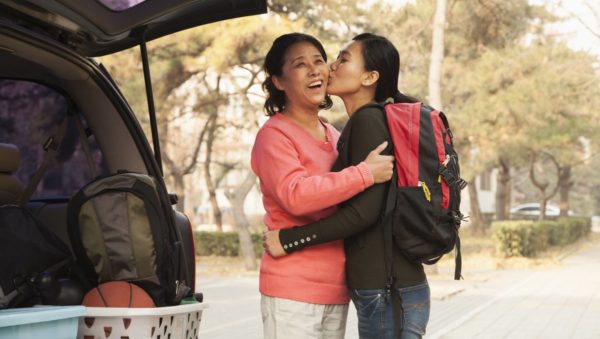 It’s no secret that students who must turn to private student loans to cover college funding gaps are more likely to be approved — and qualify for significantly lower rates — if they apply with a cosigner.

But a new analysis of thousands of student loan rate requests submitted to the Credible marketplace shows that even students with strong credit scores can get better rates when they apply with a cosigner.

Credible’s analysis also highlights the importance of comparing cosigners. The higher the cosigner’s credit score, the lower the interest rate offered by many lenders.

The Credible marketplace allows students to request rates from multiple lenders and compare how different cosigners improve their rates. Credible’s analysis of more than 90,000 rate requests submitted through the marketplace in the last year found:

Benefits for borrowers across the credit spectrum

Thanks to integrations with lenders and credit bureaus, the Credible marketplace allows borrowers to see rates they’re prequalified for with multiple lenders, based on factors that include their credit history and credit score.

Credible’s analysis of thousands of rate requests found that the benefits of applying for a student loan with a cosigner were seen across the credit spectrum.

Across all borrower credit scores, the average rate reduction when adding a cosigner was 2.36 percentage points.

Borrowers with credit scores below 620 got the biggest boost from adding a cosigner, with the minimum prequalified rate dropping by an average of 4 percentage points.

But borrowers with credit scores in the 620 to 719 range also saw rate improvements averaging more than 3 percentage points.

Anyone can be a cosigner, but it pays to compare

The Credible marketplace also allows borrowers to compare rates available to them with different cosigners, to see how much each cosigner improves their rates.

One reason grad students turn to parents less often may be that they are more likely to be able to rely on a spouse.

One in five graduate students (21.4%) checked rates with a spouse as a cosigner, compared to less than one in 10 undergrads (7.5%).

Looking for a private student loan?

Credible can help you find great options for the upcoming school year.

Not every borrower will have the luxury of checking rates with more than one cosigner. But for those that do, finding the cosigner with the best credit score can pay off.

With interest rates on federal student loans increasing for the second year in a row on July 1, rates on federal PLUS loans for parents and graduate students headed to school this fall will be 7.6%. Depending on the borrower or cosigner’s credit score, many private lenders offer rates that can competitive with PLUS loans, particularly after factoring in the 4.26% up-front fee on PLUS loans, which can raise the annual percentage rate (APR) by about 1 percentage point.

The savings that borrowers can achieve with a cosigner depend largely on the repayment term and repayment plan they select.

Most borrowers choosing private student loans through the Credible platform elect to defer payments, or just make payments on their interest while still in school.

For a borrower choosing a 10-year fixed-rate loan with payments deferred until after graduation, the average 2.21 percentage point rate reduction obtained by having a cosigner translates into $3,505 in average savings for every $10,000 borrowed as a freshman.

Although most borrowers aren’t able to begin repaying their loans immediately, choosing this option can dramatically reduce total repayment costs. Borrowers choosing a 10-year fixed-rate loan with immediate repayment can still save an average of $1,360 per $10,000 borrowed.

In the table above, interest payments and average savings are also shown for 5-year variable-rate loans, with calculations based on the initial rate on the loan. But it’s important to keep in mind that those rates can change over the life of the loan.

While interest rates on federal student loans are fixed, private student lenders typically offer borrowers a choice of variable- or fixed-rate loans. Borrowers who choose variable-rate loans usually start out with a lower initial rate. But that rate — and the borrower’s monthly payment — can go up or down with indexes they’re tied to, such as the prime rate.

With the economy heating up and the Federal Reserve raising short-term interest rates, borrowers taking out variable-rate student loans must be prepared for their rate and monthly payment to increase.

The lower rate that they are able to obtain with a cosigner seems to increase the likelihood that borrowers will choose fixed-rate private student loans.

About three out of five borrowers (59.3%) with cosigners chose a fixed-rate loan, compared to just one in three borrowers (36.6%) who lacked a cosigner.

While the standard repayment term on federal loans is 10 years, private lenders offer terms ranging from 5 to 20 years.

More often, borrowers choose to defer payments until after graduation, which can dramatically increase repayment costs. That’s because once they graduate, interest that accrued while they were in school will be capitalized, or added to their loan balance.

Borrowers who wish to minimize the impact of interest charges that accrue while they’re in school can make interest-only payments, or pay a fixed, flat rate that covers some of their interest charges.

Deferred repayment was the most popular repayment plan among all borrowers. But four out of 10 borrowers with cosigners (39.7%) chose to pay their interest while in school, compared to 30.2% of borrowers without.

Borrowers taking out loans without cosigners were nearly twice as likely to start repaying their loans immediately, with 19.3% selecting this option, compared to 10.9% of borrowers without cosigners. One possible explanation is that graduate students — many of whom work or have other means of supporting themselves while attending school — are more likely to be able to obtain a loan without a cosigner.

Qualifying for a loan

For many students, having a cosigner not only helps them get better rates, but is a necessary step to getting approved. That’s particularly the case for undergraduate students, who usually lack the credit and employment history needed to get approved by a private student lender.

Among undergraduates requesting prequalified rates available from lenders competing for business through the Credible marketplace, only 8.4% met the prequalification criteria of one or more lenders.

By comparison, more than one-third of graduate students (35.4%) were able to prequalify with one or more lenders without a cosigner.

Credible’s analysis showed that the cosigner’s credit history and score is also an important factor.

Although having a cosigner made it five times more likely that undergraduate borrowers would prequalify for a loan, 56% did not get rates. The proportion of graduate students who failed to prequalify with a cosigner was nearly identical.

Students who don’t prequalify with one cosigner still have the option of checking rates with other cosigners.

Looking at loans made by lenders competing through the Credible marketplace, more than nine out of 10 loans to undergraduates (92.3%) were cosigned, as were two-thirds of loans to graduate students (64%).

Those findings are backed up by statistics compiled by MeasureOne, a data cooperative that tracks most private student loans.

According to MeasureOne, 92.5% of undergraduate loans and 62.2% of grad school loans outstanding at the end of the third quarter of 2017 were cosigned.

Unlike federal student loans, which are made without evaluating the borrowers’s ability to repay, default rates on private student loans are comparatively low.

MeasureOne reports that the annual charge-off rate on private student loans — loans that borrowers no longer expect will be repaid — stood at 2.04% of loans in repayment as of Sept. 30, 2017, down from 4.02% at the same time in 2012.

Students and their families should realize that cosigning a loan is a serious commitment. If a borrower fails to make their monthly payments, their cosigner can expect that they will be asked to take on that responsibility.

Cosigning a loan can increase the cosigner’s debt-to-income ratio, making it harder for them to obtain loans on their own. And when borrowers don’t make payments on time, they may damage not only their own credit score, but their cosigners.

The good news is that most lenders will allow borrowers to release their cosigners from their obligation after they’ve established a track record of making monthly payments.

Before a lender will release a cosigner from their obligation, the borrower must typically be able to demonstrate that they could qualify for the loan on their own. Once borrowers have entered the workforce and established a history of earnings and credit, they may also be able to refinance their loans without a cosigner.

To recognize that cosigners put their personal credit on the line to help their loved ones save money and achieve their dreams, Credible has declared July “National Cosigner Appreciation Month.”

Competition rewards student loan borrowers who do their homework